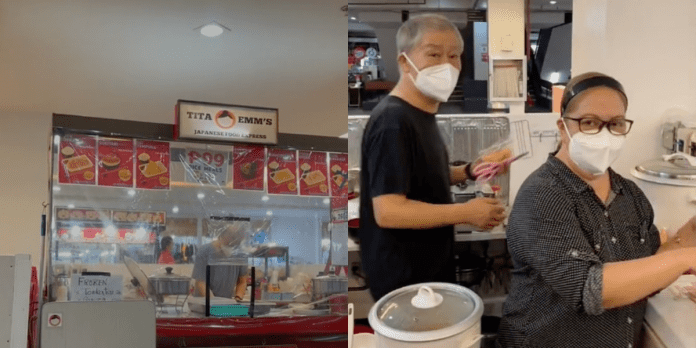 Who would have thought that a single TikTok video would help a struggling small business amid the pandemic?

Netizen SJ Wolf tried a food stall at the Makati Central Square after running some errands last February. She started filming her experience just to share a glimpse of her day on social media.

“It’s actually the first time that I went to the stall since I always go to Makati Square, but I’ve never seen the stall open, so I was really surprised to see that it’s open and then ayon, it really caught my attention,” she recalled.

SJ Wolf said that she doesn’t have any regrets for trying their products and promoting them on social media, noting that they are affordable and delicious.

“‘Yung pinakaunang reaction ko talaga sabi ko ‘shet ang sarap, tas ang mura.’ So it’s really something na you can afford and something you will truly enjoy. Like just because mura siya doesn’t mean na the quality is not there. The quality is definitely there. Sobrang sulit and nabusog ako. And it was really nice. It was really good. It was like a win-win. I eat good food and then they get recognition and the customers that they deserve din naman,” she shared.

According to the owner’s son Masaki Mitsuhashi, the lockdowns greatly affected their sales, especially when malls were closed and people started working from home.

Fortunately, the video went viral, resulting in higher sales of their small business.

“We are currently on double or triple orders in a day because of the video. Albeit still lower than the sales we had pre-pandemic. We are glad that we are slowly getting back to the pace and sales that we had pre-pandemic,” Masaki said.

“It was heartwarming to know how much my parent’s business have impacted them on their daily lives from work and at home. It inspired them to continue working hard while still having fun doing it despite being retired,” Masaki added.

After a few days, they saw a sudden influx of orders as netizens flocked Tita Emm’s Japanese Food.

SJ Wolf shared that she also had the chance to meet the owners personally.

“Sobrang happy lalo na when I got to talk to tita Emms and tito Masa,” she said.

“Sabi niya thank you kasi paran lowkey lang sila and syempre small business lang sila. So like it was a big deal for them na narerecognize na sila and then they were like very happy with sharing the aftermath of everything like, ang dami na raw nagmemessage sakanila on Facebook. Ang dami na raw likers, tapos a lot of people keep visiting them ganon and ang bilis talaga ma-sold out,” SJ Wolf said.

Masaki shared the background story of their food stall, which started operating in 2010.

“My dad is a shy type and he doesn’t really want himself to be out there in the open. They both decided together that they will just name the business after my mom just so that it also seems approachable given that Filipinos are accustomed to calling motherly figures as “Tita”. However, despite it being “Tita Emms”, my dad is very much visible and people fondly call him as “Lolo Masa” or “Tito Masa,” Masaki recalled.

SJ Wolf admitted that she initially felt guilty after the sudden influx of customers, considering that Tita Emms and Lolo Masa were the only ones manning the store.

“Kasi syempre at that age mabilis na sila mapagod, of course. Tapos dinagsa pa sila ng mga tao, so like, na-overwhelm, but they were happy din so ayon. I’m happy rin for them,” she said.

“It was one of the greatest feelings that I have–kasi as a person who always loves helping people out or inspiring people as best as I could ganon, it’s really a joy to know na the little things that I do have a big impact on someone’s life,” she said noting that if given a chance, she would continue featuring small businesses.

Tita Emm’s Japanese Food Express offers Japanese dishes such as tamagoyaki, tonkatsu, tempura, sukiyaki, gyoza, and shoyu ramen for less than P100. They are open from 11AM-8PM from Monday to Saturday.