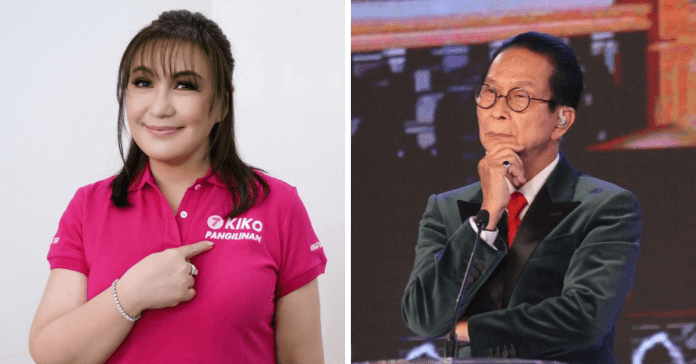 Sharon on Thursday aired her frustration after seeing a video of Panelo serenading the audience during vice presidential bet Sara Duterte-Carpio’s campaign sortie with the singer’s song in 1986.

“You are not allowed to use our song! Don’t mess with a classic,” said Sharon, adding that she would only allow its use for presidential aspirant Leni Robredo and her husband Kiko Pangilinan’s tandem.

The Megastar added: “Kidding aside, only because it is campaign season, I just think something’s a bit off when you sing a song made famous by the wife of one of your Vice-Presidentiable’s political opponents while campaigning.”

“On the other hand, maybe I should just thank you for reminding your crowds of Kiko whenever you sing it, whether you do so to mock us or not.”

Sharon earlier made rants on Twitter where her daughter Frankie Pangilinan shared the video of Panelo singing with the caption, “Lol.”

Panelo, meanwhile, clarified in a statement on Facebook on Friday that he sang the song in honor of his late son.

“I’m sorry she feels that way. It’s one of my favorite songs because it reminds me of the great lengths I took to care for my late son, Carlo, who had Down Syndrome. I honor him each time I sing the song,” said the former chief presidential legal counsel.

Supporters of Panelo also shared a video of him singing the song at the wake of his son Carlo, who died of heart complications from Down syndrome on January 6, 2017 at the age of 27.

Panelo also said that what he did was to pay homage to Sharon and the late composer Willy Cruz, and “certainly not trying to get elected by singing it.”

“I was just trying to entertain the people who took time out of their busy lives to see and listen to us. I don’t understand what’s so offensive about that,” Panelo defended himself.

Panelo added that he cleared with copyright owner Viva Records that he has the “full permission” to sing the song.

“I will continue to sing it, and will now use it to raise awareness for the plight of children with special needs. As the song goes: ‘Kahit ilang awit ay aking aawitin, hanggang ang himig ko’y maging himig mo na rin,’” stated Panelo who is running under PDP-Laban.