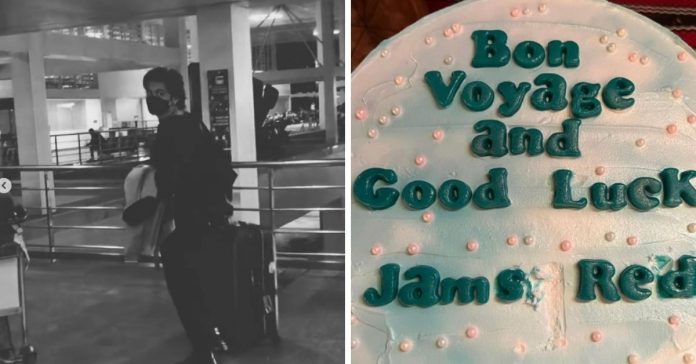 James has been receiving messages of love and support after photos of his friends throwing a despedida party for him circulated online.

Last Tuesday, February 15, the singer also shared via Instagram story a photo of his farewell cake with “Bon voyage and good luck” written on it.

On Wednesday night, James’ half sister Chantal Calicdan also shared on Instagram a clip of James bidding them goodbye at the airport.

A fanpage dedicated to James, meanwhile,  shared on Thursday a video of the 28-year-old Filipino-Australian informing his fans that he safely landed in Los Angeles.

He later ventured into acting, appearing in TV and movie projects alongside ex-girlfriend Nadine Lustre.

In October 2020, was signed to Los-Angeles based record label Transparent Arts which roster includes Far East Movement and Tiffany Young.

The collective also holds collaborations with Justin Bieber, Bruno Mars, and EXO, among others.