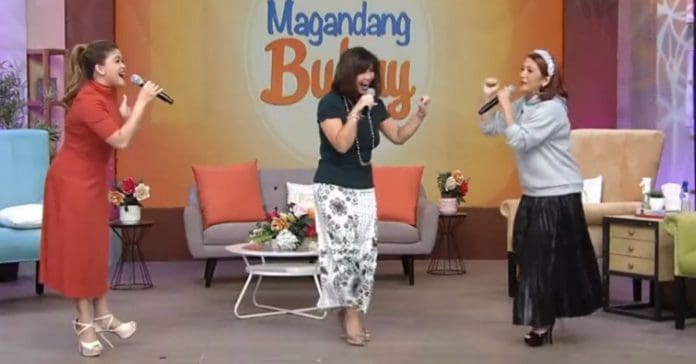 Netizens are speculating if Regine Velasquez will be a regular host in the ABS-CBN morning talk show Magandang Buhay alongside Melai Cantiveros and Jolina Magdangal.

Last January 31, Melai and Jolina welcomed Regine as a guest co-host to fill in for Karla Estrada for three weeks in the morning show.

Speculations arose that Regine will be hosting Magandang Buhay for good and replacing Karla, after netizens noticed that the morning show changed its Twitter header to a photo of Melai, Jolina and Asia’s Songbird.

“Magandang Buhay changed their header! Does this mean ? or what,” wrote a netizen.

Another Twitter user, meanwhile, reposted a clip where Jolina “claimed” about having Regine in the show in the years to come.

Regine, however, only appeared on the show until February 4, with Sunshine Dizon and Janice De Belen showing up as the guest co-hosts in the next episodes. Bianca Gonzalez, meanwhile, joined Melai and Jolina on Friday, February 11.

Karla, on the other hand, recently graced the stage of the proclamation rally of presidential aspirant Bongbong Marcos and his running mate Sara Duterte.

The actress-host took a leave from Magandang Umaga’s hosting duties after filing her candidacy as third nominee of the party list group Tingog in the upcoming May 2022 elections.