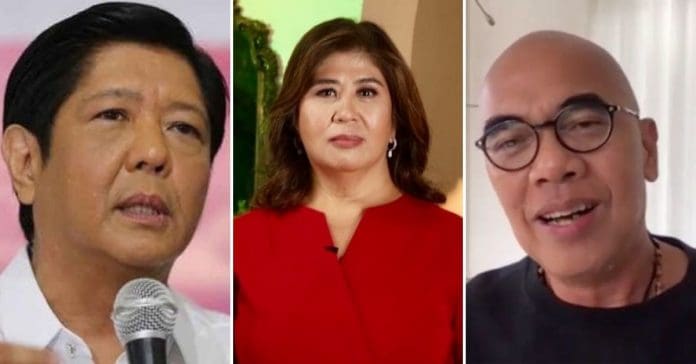 The presidential candidate caused a stir after the Kapuso network on Friday reported that he declined to participate in The Jessica Soho Presidential Interviews which airs Saturday at 6:15 p.m. on GMA Network.

All other presidential hopefuls Vice President Leni Robredo, senators Manny Pacquiao, and Panfilo Lacson, and Manila Mayor Isko Moreno, on the other hand, accepted the invitation.

The interview special features the presidential aspirants going through a series of questions about their “intentions behind running for the position, the controversies thrown at them, their stand on pressing issues and their concrete plans should they be elected.”

On Saturday, Victor Rodriguez, chief of staff and spokesperson of former senator Bongbong Marcos, revealed the reason behind the latter’s no-show at the The Jessica Soho Presidential Interviews, saying that “the hostess of said popular talk show is biased against the Marcoses, and therefore, we believe her questions will just focus on negativity about BBM.”

“Presidential aspirant Bongbong Marcos’ duty is to the Filipino people and not to a particular TV show or program host. We will continue with our way of communicating [directly] to the people in so many equally significant shows, platforms, and forums where all the attendees are allowed to present their visions, plans, and platforms freely, unfiltered and unhindered by any biases,” he added.

GMA Network later released a statement responding to the accusation of Marcos’s camp against the veteran broadcast journalist.

“Throughout her career, Ms. Soho has consistently been named the most trusted media personality in the Philippines by both local and foreign organizations, a testament to her embodying the GMA News and Public Affairs ethos: ‘Walang Kinikilingan, Walang Pinoprotektahan, Serbisyong Totoo Lamang.’

“This same ethos has guided Ms. Soho and the whole GMA News and Public Affairs organization, which is the most trusted media organization in the Philippines, according to the University of Oxford/Reuters Institute for the Study of Journalism.

On the contrary, Marcos will sit down with Boy Abunda in “The 2022 Presidential One-On-One Interviews with Boy Abunda” which will air January 24 to 28 on The Boy Abunda Talk YouTube channel and the Kapamilya Channel.

The Asia’s King of Talk is expected to “grill each of the five presidential candidates on no-holds-barred questions about their positions and perspectives on the various issues confronting the country today,” read an ABS-CBN media release sent to The STAR Saturday.

The “2022 Presidential One-On-One Interviews with Boy Abunda” first streams on The Boy Abunda Talk Channel on YouTube from January 24 to 28 at 6 p.m., and airs at 11 PM on Kapamilya Channel.