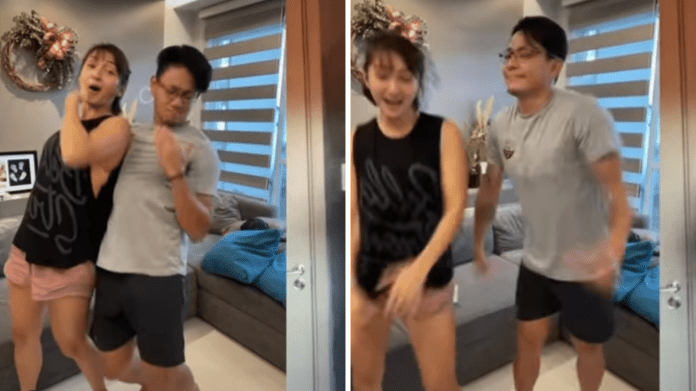 Iya Villania and Drew Arellano have found TikTok as their pastime while undergoing home quarantine.

After testing positive for the coronavirus, Iya took to Instagram to share how it was hard for her and Drew to be isolated from their kids Primo, Leon, and baby Alana.

“Drew and I are still hanging onto that little chance that maybe the kids are spared,” wrote Iya, alongside photos of their children from behind glass doors.

“This post is for all mamas and papas that are going thru the same thing and have to endure not hugging and kissing their children. This was the hardest thing to accept upon learning I was (COVID-19) positive,” added Iya, who just days ago, revealed that she’s pregnant with her fourth child with Drew.

Iya continued to relate how it broke he heart to see thir youngest “cry for me and not being able to console her for a bit”.

“My tip? Try not to cry! Coz the tears will only cause nasal congestion and lengthen recovery!

“I know, I know… ang hirap! Man, I cried! But you have to get over it as soon as you can and get in that speed car towards recovery for your family. Kapit guys! There’s a whole bunch of us! We can do it!”.

In a separate Instagram post on Tuesday, Iya shared how they have been dealing with boredom while in quarantine.

“The hubz was bored so said yes to Tiktok,” Iya said as she shared a video of them side by side with Rayver Cruz doing the Came to Do Challenge.