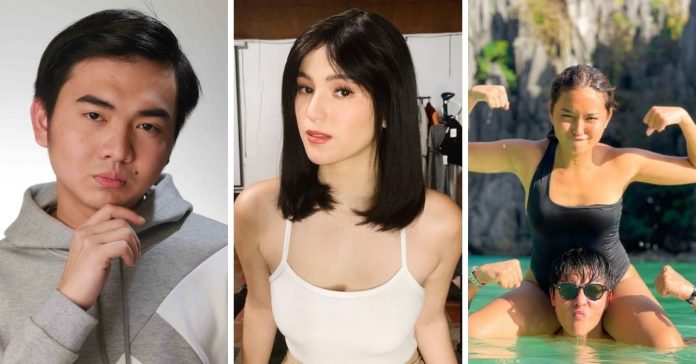 Is this Daniel Padilla’s reaction to Xian Gaza’s FB posts?

In a Facebook post on Wednesday, January 5, Xian tagged Barbie Imperial and Kathryn Bernardo alongside lyrics from Daniel’s song “Nasa’yo na ang Lahat”, prompting netizens to speculate that the internet personality has a “tea” to spill about KathNiel.

In a subsequent post, Xian shared a photo of Daniel’s mom Karla Estrada, with Barbie spotted behind the celebrity mom.

The photo was a screenshot from a vlog by Youtubers Beks Battalion’s Christmas carolling at Karla’s residence last December.

Fans of Kathryn and Daniel have since taken to social media to air their dismay over Xian’s actions, after his posts led some netizens to think that the couple have broken up.

Meanwhile, a fanpage dedicated to Katniel, shared via Instagram story a screenshot of Daniel reacting to a photo of him and Kathryn with the caption: “Ang bumangga, giba”.

“Pero wag niyo na pansinin yun. Nonsense,” the actor added with a wink emoji, which fans deemed as his reaction to the issue.

On Twitter, the hashtag #HuwagAngKathniel landed on Twitter’s local top trending list as fans  rally to protect Katniel and spare the reel-and real life couple from such gossip and blind items online.

Kathryn and Daniel marked their 10th anniversary as a loveteam last September, and are set to celebrate nine years of being a couple in May.