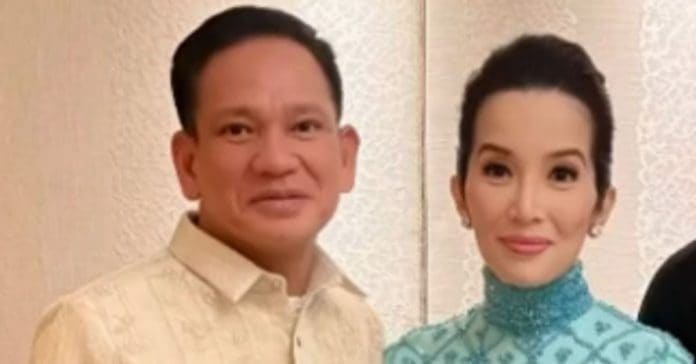 After netizens speculated about her and fiancé Mel Sarmiento’s breakup, Kris Aquino took to social media to share his last text message to her to confirm that they had broken off their engagement.

The host-actress revealed that her health has continued to deteriorate. Her weight has gone down to 40 kilos and she is looking at traveling abroad to seek treatment for her condition.

But she was willing to speak on separation so that her and her sons Josh and Bimby could move on.

“Sa pinagdadaanan ko ngayon, may tao bang gustong pag-usapan pa ang kanyang paghihiwalay? But in order for me to peacefully move on, and focus on myself and my health because my sons still need me, kuya josh has autism and bimb will only turn 18 in 3 years, 3 months, and 16 days, I must end this chapter.”

On the Instagram post, she shared the screenshots of the former Department of Interior and Local Government (DILG) Secretary’s parting words for her.

Sarmiento explained that as someone who loves to go out, he will not be able to continue living in a bubble with her.

Due to Aquino’s autoimmune disease Chronic Spontaneous Urticaria, a doctor-cousin of the former told Sarmiento the “responsibility” of making sure she does not catch the virus.

After not seeing her “because I might further put you at risk and I don’t want to be blamed for it,” Sarmiento said he had enough time to think about their relationship and “accepted the fact that ensuring you don’t get COVID is an enormous responsibility.”

He said: “On that note, with a heavy heart, I accepted your offer of letting me go. For I cannot in conscience be able to accept that something to you brought about my going out of the bubble.”

Aquino has already announced that the public will no longer hear anything about her ex-fiancé from her.

“After that you will never read nor hear anything at all about him from me, because I still want to preserve whatever dignity I have left.

“By doing this I only request for some respect for my humanity & privacy now and in the coming months when I fight for my health,” she ended.

It was just in October when Aquino and Sarmiento announced their engagement on her social media pages. As of writing, she has already deleted her posts with her former partner.

RELATED: Kris Aquino on Mel Sarmiento: ‘The man I said yes to spending the rest of my life with’