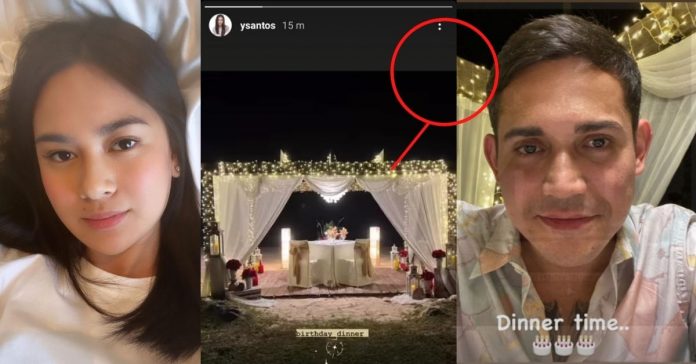 Did Yen Santos go on a birthday dinner date with Paolo Contis?

Yen Santos appeared to have celebrated her birthday with Paolo Contis as seen on the rumored couple’s social media posts on Saturday.

On Instagram, Paolo shared a smiling selfie with the text “Dinner time” along with birthday cake emojis.

Minutes later, Yen, also posted via Instagram a photo of a birthday dinner setup for two, which seemingly matched the background on Paolo’s photo.

She also recently shared a bouquet of tulips from someone ahead of her birthday.

A netizen, meanwhile, recently noticed that Paolo earlier deliberately tagged Yen in a selfie pic with the caption “pssssst.. good morning!,” leading to speculations that the two have been secretly communicating online.

The two have been rumored to be in a romantic relationship after several sightings of them together in Baguio late August, amid Paolo’s split with LJ. 

In September, Paolo, however, claimed that Yen only went there “as a friend”.

LJ and her children, including Summer, her daughter with Paolo, left for the States in August following the breakdown of her six-year-relationship with the actor.

In an interview with Boy Abunda, LJ confirmed the separation, saying it wasn’t a mutual decision.

In her most recent chat with Abunda in New York, the actress revealed Paolo has yet to make any effort to reach out to her after they parted ways.