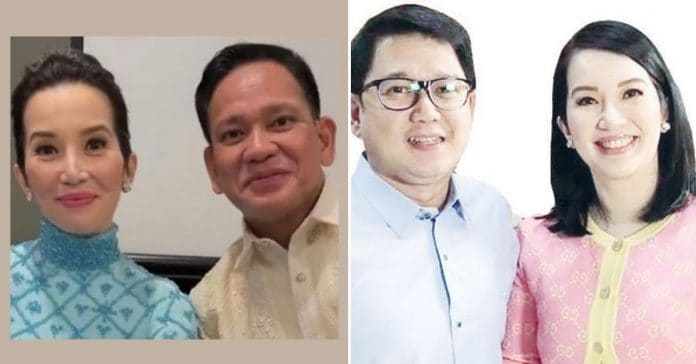 Kris Aquino slammed senatorial aspirant Herbert Bautista for supposedly using their past relationship to gain attention from the public.

This after Kris’ fiancé, former Department of Interior and Local Government secretary Mel Sarmiento, called out Herbert over a now-deleted tweet where the latter talked about missing his chance to pull off a marriage proposal to a certain someone.

“Mr. President Ping, na-inspire din tuloy akong mag-propose. Kaso, sayang… may napili na po sya,” Herbert tweeted alongside the hashtags #TOTGA (The One That Got Away) and #KungMaibabalikKoLang.

“Although Mayor Herbert Bautista has already taken down his post which obviously referred to Kris, I just wish that this would serve as a reminder that talking about past flames in public is improper and ungentlemanlike,” Mel said in a copy of statement furnished to The Philippine STAR.

Mel stressed that as for someone who is seeking a national post, Herbert should focus more on laying down his accomplishments as a public servant than talk about his past relationship in public.

“As a former public servant now seeking a seat in the Senate, he should know better than dragging other people to get public attention. Hindi po showbiz ang Senado.

Kris, meanwhile, also took to Instagram to air her dismay over Herbert’s remarks, recalling how she personally paid him a visit on his birthday and ended their seven years of friendship months ago.

“July 21, bilang respeto- sana naman natatandaan mo yung sinulat ko sa birthday/goodbye gift letter na personal kong inabot sa yo nung May 12, 2021- nasabi ko dun ‘we both deserve our versions of ME AFTER YOU’ kaya nung alam na ng puso ko that it was Mel, I messaged you to ask if we could talk. Right away ikaw ang tumawag. Magaan ang usapan BUT I did tell you, BEFORE I told anybody else, that my version of ME AFTER YOU had already begun.”

The former presidential daughter and sister then asked Herbert to talk about his present rather than his past love life, since he’s now “in a new relationship with a beautiful girlfriend”.

Kris also echoed Mel’s statement about wooing the people’s votes through his accomplishments and not his past relationship with the actress-host.

“I totally agree with what he said especially because sa survey na nakita ko, within striking distance ka na sa Magic 12 – so there’s no need to use our past to gain attention.

“Trust in yourself, that your track record is more than enough to get you elected and have enough faith in the wisdom of the Filipino voters,” Kris stated.

In a separate Instagram post, Kris referenced a Taylor Swift song to thank Mel for being “the better man”.

“When I woke up beside him this morning, I really thanked God and thanked my kuya up in heaven for reconnecting me with #thebetterman,” she said of her fiance.

“Thank you babe… Nobody has stood up & fought for me the way you have consistently been doing. You have never blamed me for my past, instead you have just loved me for me,” added Kris.

In another tweet, she shared a bouquet of flowers from Mel with the message that read: “My dearest Babe, you have a rough day yesterday. Chill and be happy today. Love you very much. Your Babe Forever.”

Herbert, meanwhile, has apologized for his remarks in a post which has also been taken down from his Twitter accoount.