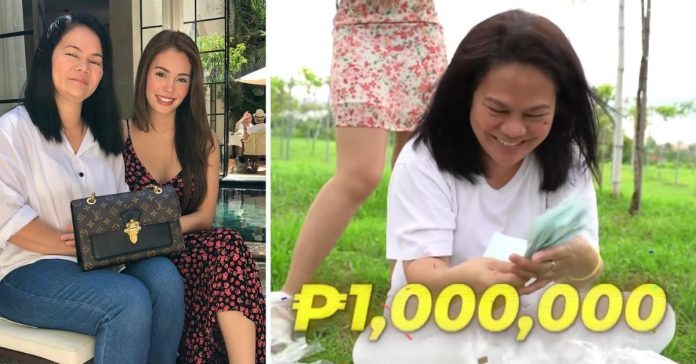 Ivana Alawi just made Mama Alawi’s birthday even better with a surprise “money-picking” adventure in Batangas.

On her most recent Youtube upload, the vlogger-actress shared that she is only fulfilling her mom’s dream of picking fruit outdoors.

This experience had a big twist as Mama Alawi realized that instead of fruit, she will be picking ten checks worth P100,000 each.

Ivana shared that she wasn’t able to celebrate Mama Alawi’s birthday properly because she was feeling under the weather for a few weeks.

On her vlog, the 24-year-old’s brother Hash revealed that he and their bunso Mona gave their mom P100,00 on her birthday.

Ivana added that their mom would rather buy food for people rather than buying items for herself.

It was in early November when Mama Alawi received the sweetest birthday message from her daughter.

“You are that one person who never stopped believing in me and on my dreams. Thank you for raising us to be strong, kind hearted and giving as you are,” she wrote.