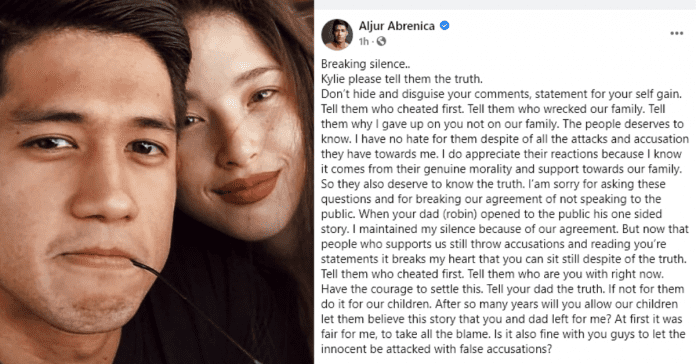 After daring Kylie Padilla to tell the public the truth on “who cheated first” in their marriage, Aljur Abrenica now wants the controversy over their marital problems be put to rest.

In a press conference for the film Manipula, Aljur explained what made him break his silence and urge his estranged wife to admit the reason behind their controversial split.

“The reason why na nagawa ko ’yun (is) out of impulse. I felt like nasadsad na’ko. Lubog na ko. Nabugbog na’ko. It was not my intention na maglabas na ganong post pero naramdaman ko talaga na kailangan,” Aljur was quoted as saying in an ABS-CBN report.

Aljur admitted that he had his shortcomings but that he truly loved Kylie before the breakdown of their marriage.

“I can still say na she was the love of my life. Talagang minahal ko ’yung babaeng ’yon. And I valued our family more than anything. So, I was really affected nu’ng nangyari yon. And in respect, sana, di ba, pamilya ko pa rin sila. May pagkakamali din ako,” said Aljur.

The actor went on to say that despite their falling out, he’s still thankful for what they had together as a couple.

“She’s still the mother of our children. May pinagsamahan pa rin kami. I will never forget that. Nagpapasalamat ako,” Aljur said.

Aljur, who’s been receiving criticisms following the cheating allegations, also stressed that he has nothing more to say about the controversies surrounding his failed marriage with Kylie.

“At for the sake of our children . . . gusto ko na matapos ‘to. Hanggang doon na lang. In the future, they’re gonna see this,” added Aljur.