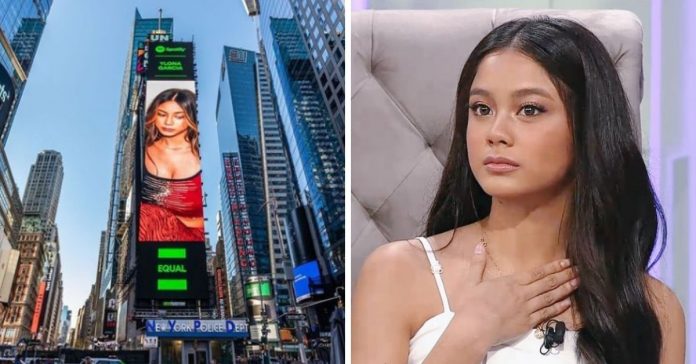 Ylona Garcia was surprised and grateful to see herself being featured on a billboard in New York’s iconic Time Square.

The former Pinoy Big Brother housemate on Thursday took to Instagram to gush about her appearance at the world-famous commercial intersection.

Ylona, 19, is one of the female artists featured in music streaming platform Spotify’s global EQUAL Music Program which aims to foster equity for women in music globally.

“THANK YOU VV MUCH @spotify FOR THE AMAZING OPPORTUNITY OF FEATURING ME IN THE EQUAL GLOBAL FLAGSHIP PLAYLIST !!,” she added.

The young singer is one of the Filipino celebrities to take over the Time square billboard such as  Julie Ann San Jose and Nadine Lustre.