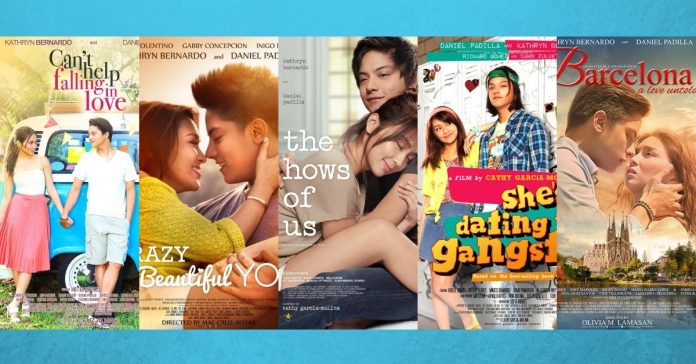 Five Kathryn Bernardo and Daniel Padilla starrers are going to have Bollywood adaptations.

The ABS-CBN Film Productions announced Friday that it is forging an agreement with Global One Studios of India to remake films of top love team KathNiel, namely Barcelona: A Love Untold, Can’t Help Falling In Love, Crazy Beautiful You, She’s Dating The Gangster and The Hows Of Us.

The deal sees India localizing Filipino films for the first time, which will star new and talented Indian loveteams.

“This is a great opportunity for ABS-CBN Films to share our well-loved and heartfelt stories and become a source of inspiration for global audiences,” said ABS-CBN Films managing director Olivia Lamasan.

“The Philippines and India share many common values, among which is the strong love for family that resonates in our films and will soon be experienced by the people of India,” she added.

Global One Studios president Ramesh Krishnamoorthy, on the other hand, expressed excitement in teaming up with ABS-CBN Films for the Indian remakes.

“We are happy to be associated with ABS-CBN Films to bring their well-crafted love stories to the people of India by adapting their heartrending films in Indian languages. Family bonding and cultural values are common to both Philippines and India, which are captured seamlessly in their films,” said Krishnamoorthy.

“This will be the first time that five Filipino films will be remade in India and we are excited to join hands with ABS-CBN to showcase their relationship stories with the same intense and emotions through our films,” he added.

Kathryn and Daniel, who recently marked their 10th anniversary as a love team, raked in awards for their performances in their blockbuster films.

The pair were named Phenomenal Box Office Stars for The Hows of Us in 2019, Box Office King and Queen for Barcelona: A Love Untold in 2017, and Prince and Princess of Philippine Movies for Can’t Help Falling In Love in 2018 as well as Crazy Beautiful You in 2016.

Barcelona: A Love Untold also won Best Picture in the 65th Filipino Academy of Movie Arts and Sciences (FAMAS) Awards, while The Hows of Us received the Golden Jury award from the 50th Guillermo Box Office Entertainment Awards.