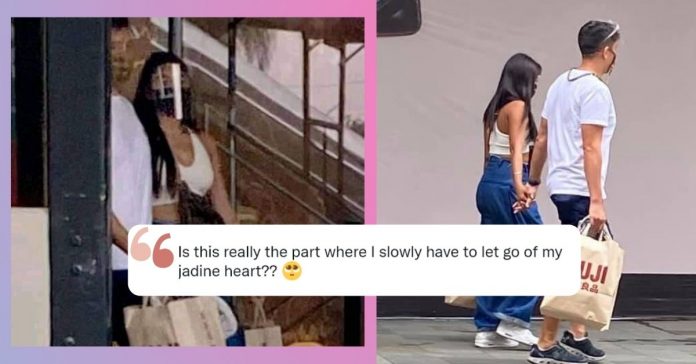 JaDine fans’ hearts are “breaking for the second time” after sweet photos of Nadine Lustre with her rumored new boyfriend surfaced online.

On Friday, snaps of Nadine spotted holding hands at a shopping mall with a guy whom netizens identified as her rumored French boyfriend Christophe Bariou went viral.

JaDine immediately landed on Twitter’s trending topics as fans, who held onto the fandom even after the former loveteam’s split, aired their reaction to the photos, with some posting their favorite fond memories of then-reel and real-life couple.

James and Nadine, who made their relationship public in 2016, confirmed their split in a joint statement in January 2020, saying that they wanted to focus on their individual growth.

This is not the first time Nadine was spotted with Christophe, as the sightings of them in Siargao in the past months also spread online.

While fans are trying their best to “move on”, they still extend their continued support and wish happiness for both James and Nadine.