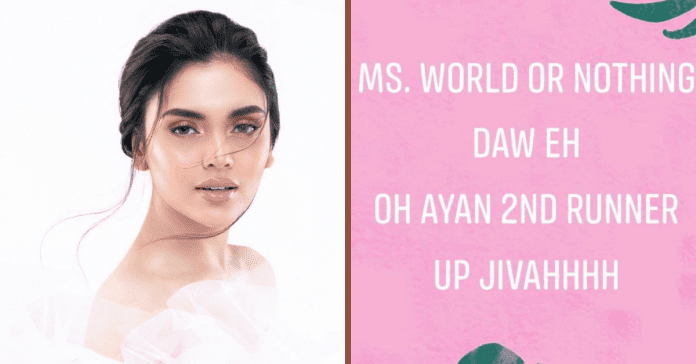 TV reporter Ganiel Krishnan hit back at a swimwear designer for allegedly ridiculing her for not claiming the Miss World Philippines title.

The supporter is convinced that Domz was alluding to Ganiel who finished as second-runner in the recently concluded Miss World Philippines 2021.

Ganiel previously expressed in an interview in May her desire to win the crown.

“Alam mo, when you think so much about winning, parang there are lesser chances for you to think about losing.

“I just really want to stand by what I said. It’s really Miss World or nothing because I am really aiming for the World. Yun talaga yung gusto ko,” she said.

“Even if he didn’t mention Ganiel Krishnan’s name in his post, it was clear as day that he was throwing shade at the beauty queen, using her famed answer during the MWP screening ‘MWP or nothing’ and even added her MWP placement,” stated Jerome.

“This is quite alarming because it has become a culture amongst Pinoy pageant fans to bash and bully candidates without considering the trauma it might cause to the bullied,” he added.

Jerome hopes that the swimwear designer will be reprimanded for his actions.

“As the swimsuit provider of Binibining Pilipinas, it also stains the reputation of the organization because of his affiliation so I am hoping that he will be reprimanded or dropped because of his bullying ways.

“It’s high time that we call out these people who find satisfaction over other people’s heartbreak and misery.

“It discredits the sacrifice and hardwork of the candidates and no one, regardless of his affiliation with any organization, has the right to invalidate the dream of any Filipina by bullying”.

Fellow beauty queens in the comments section on Instagram, meanwhile, showed their support to Ganiel.

The designer has not issued a statement as of writing.