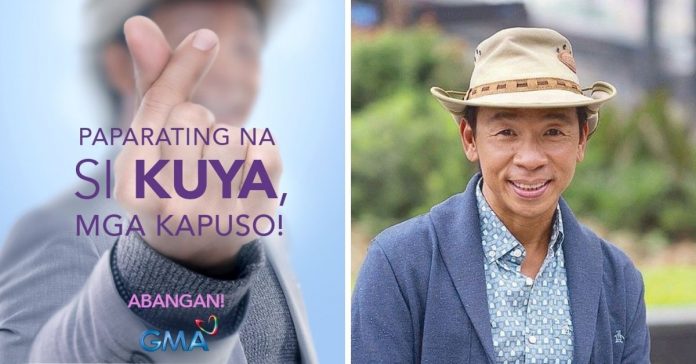 Network transfer rumors of Kim Atienza, more popularly known as Kuya Kim, escalated after GMA made this announcement on Wednesday.

The Kapuso network, through its social media platforms, shared a teaser poster of a text that read: “Paparating na si Kuya, mga Kapuso! Abangan!” over a blurred background photo of a man doing the heart finger sign.

GMA Network, GMA Public Affairs, and GMA News, all posted the photo with no caption in it.

Netizens, in the comments section, were quick to guess that the mystery man in the photo was Kuya Kim, who’s been a weather news anchor and TV host in the Kapamilya network.

In a recent Facebook Live, Kuya Kim seemingly hinted at his network switch and talked about the decisions he will be making in the coming days as well as his “period of transition”.

“For those who follow me here on Facebook and YouTube, Kuwentuhan with Kuya Kim, remember, a couple of weeks ago, I was… I told you to pray for me because I am in transition. Remember that? I will always be very truthful to you, my Facebook and YouTube followers, utang na loob ko sa inyo for following me and for being with me through hard times and good times. And that period of transition is still ongoing. Transition,” said Kuya Kim.

On Twitter, Kuya Kim retweeted a post by a netizen wishing him well on his next endeavors and thanking him for service in the Kapamilya network.