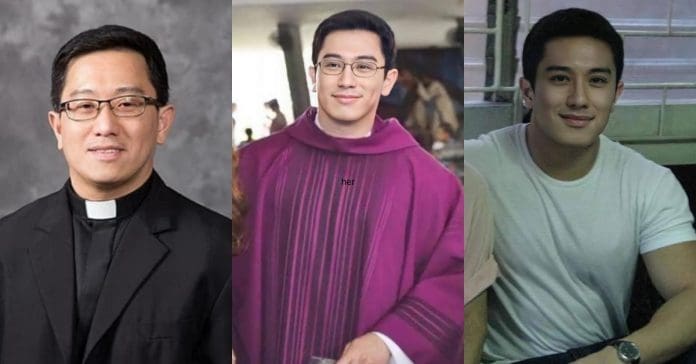 Father Ferdinand Santos, the Filipino priest who caught the attention of netizens with his artistahin looks, has reacted to a claim that his viral photos were edited.

Dean Ranhilio Aquino of San Beda University Graduate School of Law first shared a photo of Father Ferdinand in a Facebook post, sharing how he is “in awe of him”. The post has since gone viral.

“We met while he was a student at the Catholic University of Louvain and I was a post-doctoral research fellow there. He and I were in the classes of Prof. Jan van der Veken on Process Metaphysics,” wrote Dean Ranhilio.

“Aside from holding a PhD in philosophy, he is a licensed fitness instructor! Amazing. But even more amazing is that he gave up the prestigious position of Rector of St. John Vianney Seminary in Florida that has both philosophy and faculty theologies to return to the Philippines to work in depressed parishes. Laus Deo,” wrote Dean Ranhilio.

According to his profile from the Archdiocese of Miami, Father Ferdinand who was ordained by Cardinal Jaime Sin in 1998, flew to the U.S in 2003 and taught theology and philosophy at the Providence College in Rhode Island the same year until 2007.

Father Ferdinand started teaching at St. John Vianney Seminary in Florida, USA in 2007 and became the rector of the seminary in June 2017, following a request from a former classmate for him to fill in for another professor who at that time had gotten ill.

Several photos of Father Ferdinand made rounds online following Dean Ranhilio’s post, with netizens expressing admiration for his “artistahin” looks as well as his commitment and dedication to serve.

Amid the “hype” on social media, a Facebook user however, alleged that the circulating photos of Father Ferdinand “were edited to make Fr. Ferdie’s face look young”.

Father Ferdinand, on the other hand, has made clarifications over the claims on his personal Facebook account, sharing his latest selfie to “end all the ridiculousness all around”.

“Ladies and gentlemen, yours truly is old! And dang proud of it!!! The photos people have drawn from my FB page span 17 years! But no, they were not edited. I don’t have the sophistication or the time to waste to do that kind of work. So please don’t expect to see or meet my 30+ year old self,” he said.

“I’ve been a Roman Catholic priest for 22 amazing years and I’ve been happy and fulfilled in every single one of them. It’s a truly blessed life, because one is able to help people, to bring them to God, and to be a reminder to them, and to the whole world, that there’s so much more to life than constantly running after things that will never fully satisfy us no matter how much of them we amass for ourselves,” he added.