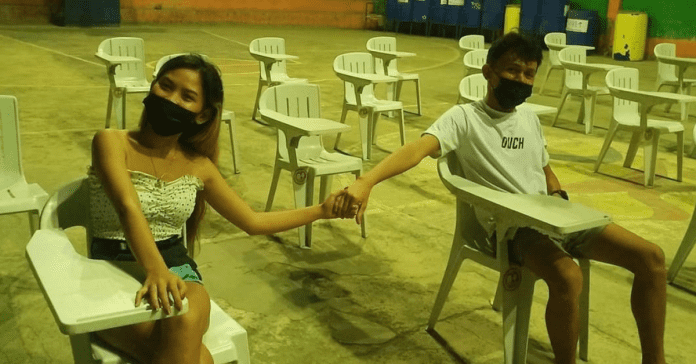 An ex-couple from Talisay, Cebu had an unexpected reunion after they were both caught violating the curfew.

A photo of former lovers Angelica and Noel went viral on Wednesday after they were pictured holding hands at the curfew violators’ holding area in Jaclusan Gym on Tuesday, August 24.

On its Facebook page, the City of Talisay Police Support, a group of civilian volunteers who aids in the maintenance, peace and security of the city, shared the story behind the viral photo.

According to the group, Angelica was brought to the holding area by a police officer, but got shocked and felt nervous to find her ex-boyfriend who, likewise, was apprehended for violating curfew hours.

To help ease the tension, the group then jokingly suggested to Angelica to sit beside her ex, but she ended up holding hands with him instead.

The group also shared that the exes are actually just fresh from their breakup: “Nag-break sila one-week pa lang po.”

The funny and unusual encounter brought laughter to netizens, garnering over 5,000 reactions on Facebook, as of writing.