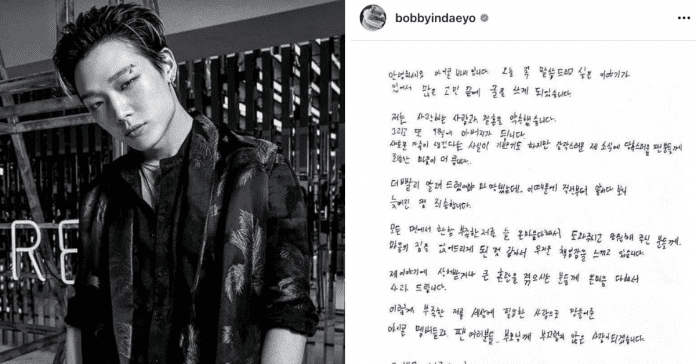 Bobby of K-pop boy group iKON is going to be a dad!

On Friday evening, Bobby took to Instagram to share a handwritten letter to his fans, announcing his marriage plans and his fiancée’s pregnancy.

“I have promised marriage with a person I love. I am also becoming a father in September,” read Bobby’s note as translated on South Korean pop culture website Soompi.

The 25-year-old rapper, singer-songwriter said he’s glad to be welcoming a new family member, but feels sorry for his fans who will be surprised with the news.

“I should’ve let you know earlier, but I apologize that I am letting you know later as I was worried more than anything for this reason,” said Bobby.

“I sincerely apologize to the people who are hurt or confused by my news,” he added.

Bobby went on to promise that he’ll work even harder for his group members and fans.

Fans, meanwhile, sent Bobby love and congratulatory messages in the comments section and on Twitter.

Bobby, who’s real name is Kim Jiwon, officially made his debut in 2015 under YG Entertainment.