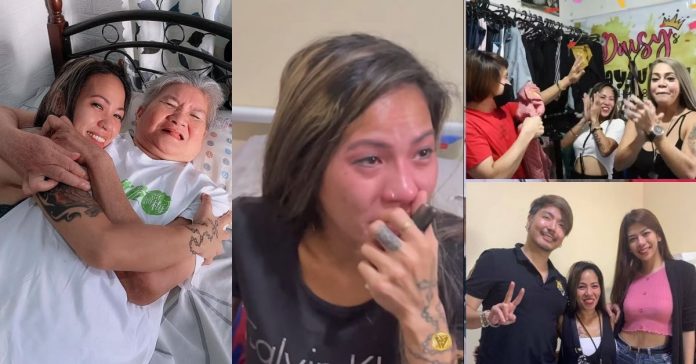 Madam Inutz in tears after receiving aid from celebrity vloggers

Donita Nose and Ethel Booba recently paid a visit to Madam Inutz home and bought all the preloved and secondhand clothes she was selling online which totaled to P21,000.

Madam Inutz, who earned instant fame on social media after her live selling videos amused netizens, was thankful for Donita and Ethel’s gesture.

Madam Inutz, a single mom, said she had to work twice as hard for her family and support the needs of her mother who is bed-ridden after suffering a stroke.

Madam Inutz received P100,000 to support her mother’s medical needs and another P100,000 for her online business.

Madam Inutz said she is saving money in hopes of buying and owning a house and lot for her family.

The online seller related she’s happy that her live selling videos has somehow become a source of entertainment for netizens amid the COVID-19 pandemic, but also admitted the struggles in making ends meet.

Madam Inutz also expressed her disbelief on her instant popularity online, saying she was just being herself.