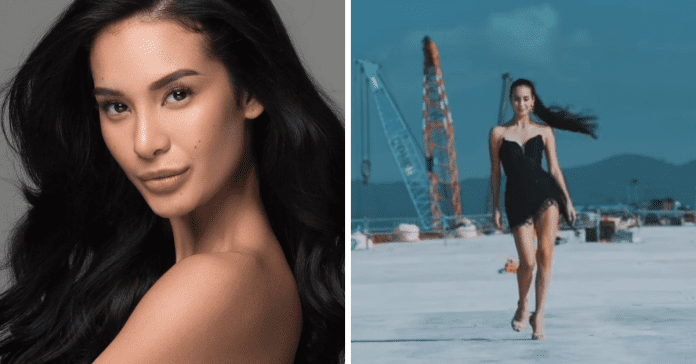 Cebu representative Steffi Rose Aberasturi wowed netizens after sashaying across the almost finished Cebu-Cordova Link Expressway for the Miss Universe Philippines runway challenge. And her signature walk has a name.

Steffi quickly became a hot topic among pageant fans online following the release of the runway videos of the national beauty pageant’s 75 candidates on Monday night.

In the one-minute video, Steffi effortlessly strutted, with her hips effortlessly swinging left and right, while showcasing the Cebu-Cordova Link Expressway in different angles.

“We made history! Proud and honored to be the first Cebuana to strut on the soon to open Cebu-Cordova Link Expressway…in HEELS!❤️,” she wrote as the caption on Instagram.

The 26-year-old noted that she wore three different black ensembles “to promote the new breed of young promising designers who will continue to carry the torch of Cebuano excellency in fashion”.

“From the location to the music to the breathtaking drone shots and to the presence of this Cebuana who made a pasarela that commanded attention. Talk about slaying, she nailed this one almost effortlessly,” he wrote in a Facebook post on Tuesday.

If Miss Universe Philippines 2019 Rabiya had her “Halabira” walk, Steffi’s pasarela is called the “UnSteffable” walk, a play on the Cebuana beauty’s name and the word unstoppable, Steffi’s manager Stacy Avila Loren told The Philippine STAR Latestchika.com in a phone interview.

Steffi announced her participation in the national beauty pageant after the announcement of the Top 100 delegates in mid-July.

“I am very fortunate to share the same goal with 99 other outstanding and beautiful Filipinas who are just as excited as I am to make a difference and inspire,” she said.

In her introduction video, Steffi revealed that she’s an online seller, a farm girl, animal and nature lover and a certified scuba diver.

“I’ve been selling food, clothes, skincare and that is something I wanna share with the universe.”