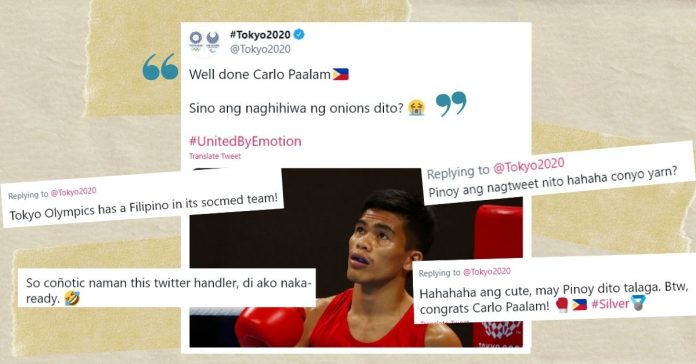 But it was the Tagalog phrase included in the tweet that caught the attention of Pinoy netizens: “Sino ang naghihiwa ng onions dito?

Some netizens, in the reply section, seemed to “correct” how onion is said in Filipino.

Tokyo 2020, however, maintained that they are well aware of the word, saying: “Yes we are aware (onion) is sibuyas, but siempre, Taglish is pretty common over in the Philippines diba?

Netizens are now somehow convinced that a Filipino admin is behind the conyo tweet which earned laughter online.

Tokyo 2020’s tweet has since found a match in netizens’ inner conyos.

Conyo is a Pinoy slang term that refers to the way a Filipino combines the Tagalog and English languages, a.k.a. Taglish, in conversations.

This isn’t the first time that Tokyo 2020 inserted Tagalog words in tweets. Do you think there’s a really a Pinoy behind the Tokyo 2020 social media account, or they made research lang?