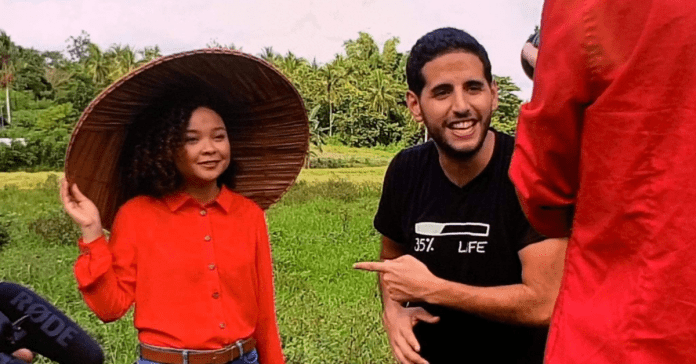 In light of the Whang Od Academy controversy, chef and social entrepreneur Louise Mabulo has spoken up about her “negative experience” of working with the Palestinian-Israeli vlogger Nas Daily two years ago.

Louise is an awardee of United Nations Environment Programme’s (UNEP) Young Champions of the Earth Prize for Asia & the Pacific, for the Cacao project – an initiative aims to “ensure better and fair pay for farmers”.

In a lengthy post on Facebook on Thursday, Louise related that Nas Daily, who’s known for his one-minute videos, visited her hometown in 2019 for a feature, but that she “was disappointed to learn that the man I’d looked up to for years was not the bearer of good news he’d misled his followers to believe he was.”

Louise stated that her family welcomed Nas Daily and other content creators with “the typical hospitality we are known for”, only to be told later by the vlogger that he was disappointed that her story wasn’t the “presentable click-worthy content” he had imagined.

“My family received no greetings nor any thanks from him when we’d received him into our home, going on to say we were only wasting his time,” said Louise.

She also went on to write about Nas Daily’s alleged discrimination against farmers, Pinoy-baiting, and how he supposedly mocked the locals’ accent.

“I watched him imitate and mock the local accent and language, vocalising Tagalog-sounding syllabic phrases saying it sounded stupid. He repeatedly said that the people of my hometown ‘poor’.

“He said no one wants to hear about farmers or farms, it’s not clickable viewable content. He didn’t care about making change or shedding light on real issues— he only wanted content, a good, easy story to tell that would get him more Filipino views. He even joked at the start of the day that all he needed was to put ‘Philippines’ in the title, and he’d rack in millions of views and the comments would come flooding with brainless ‘Pinoy pride’ comments.”

She further compared her experience to Nas Daily with past interviews.

“I’ve worked with journalists, documentary-makers, professors, who have seen my work, interviewed me, and even featured us, and have had no negative experiences that could ever brush up to what I saw that day.

“Blatant discrimination of my people, no regard for local customs or cultures, and he’d built a story in his mind without meaningfully understanding the context of what he was going to cover. As a result, he was disappointed that my work wasn’t the perfectly packaged story he’d pre-determined and imagined — I mean what visual popcorn can you create out of a farm?”

Nas Daily and his team supposedly left without Louise’s story.

“And now, he has overstepped and had the audacity to do the same to Whang-Od and the Butbot Tribe,” said Louise as she shared her sentiments on the issue surrounding the tattoo artist legend’s online course being offered under digital learning platform Nas Academy.

A relative of Whang-Od earlier claimed that the Whang Od Academy is a “scam”, saying that the tattooist had no knowledge of the online course.

Louise, however, dubbed it a “dubious contract”, and encouraged the public to make a stand against exploitative content creators.

“Filipinos should stand together on this — We are not content to be exploited. We are not culture to be capitalised. We are not people to be romanticized. Or poverty to set the scene for ‘Benevolent Saviors’. We are more than what the world thinks of us.”

Nas, meanwhile, took to Nas Daily Tagalog – a Facebook page dedicated to his Filipino audience to counter Louise’s statement, telling the Cacao Project founder that she can’t “share falsehoods on the Internet for free”.

“To my biggest sadness and surprise, your story was not true on the ground. Once we arrived at your plantation, once we saw the village and talked to the farmers, we came to the conclusion that there is no story here. That the awards on the Internet are just that…awards,” wrote Nas.

Nas went on to say that he personally went to the country to support Louise but flew back to Singapore disappointed.

He also contradicted Louise’s claim that he disregarded her family’s hospitality when he and his team went to her hometown.

“When we told you in person that we believe your story is not true, you understood us and you bid us farewell. We thanked you for your time and your hospitality and we went back to the airport. In fact, we took nice pictures with your family before we left.”

Nas then told Louise to “be truthful about your work” and “not share online falsehoods”.

“That is borderline illegal. Everything you said is with malicious intent and it is clearly not how I speak. We have 5 years of evidence to back that up,” said Nas.

Louise was quick to respond in another Facebook post, saying: “I will not take advice nor criticism, especially when you clearly don’t understand Filipino farming and culture, or refuse to.”

She also urged the public not to get distracted and deal with the “real issue at hand that we have to stand for – the alleged exploitation of Whang-Od and her tribe.”

“Attacking me this way does not validate your behavior, the words you’ve said nor the injustice you’ve built your entire career on. Diverting this to me won’t work — this is about Apo Whang-Od and what you’ve done to her Tribe.”