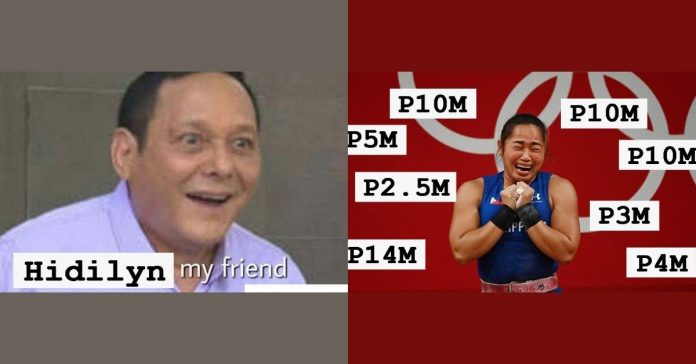 “Somebody is spreading this around!” wrote Ronnie in an Instagram post alongside a screenshot of an edited photo of him with Hidilyn and her multi-million worth of prizes.

Ronnie played the role of financial analyst Tommy Diones who is known to be a fraudster and likes to take advantage of Michael V’s multimillionaire character Pepito Manaloto in the hit Kapuso sitcom.

Channeling his character, Ronnie jokingly asked for a share from Hidilyn who stands to receive over P50 million worth of cash incentives after clinching the country’s first gold medal in the Tokyo Olympics weightlifting event.

Aside from the cash incentives from the government and private sponsors, several brands and companies also pledged non-monetary gifts to reward Hidilyn for her triumph at the world’s biggest sporting event.