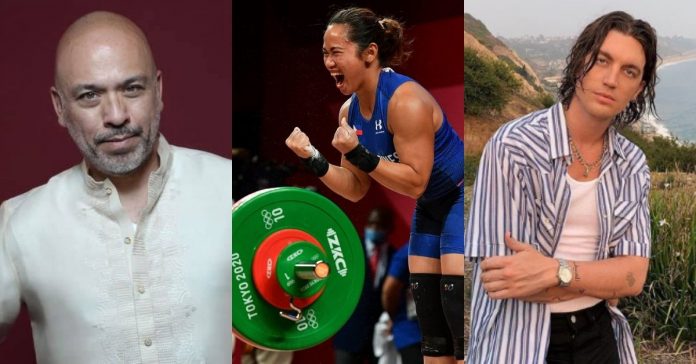 Hidilyn Diaz reaped praises from both local and international celebrities after she made history on Monday as the Philippines’ first-ever Olympic gold medalist.

The 30-year-old athlete ended the country’s 97-year drought with a record-breaking win in the women’s 55-kilogram weightlifting event at the Tokyo Olympics.

Hidilyn bested eight other competitors in the category after lifting a combined weight of 224 kilograms.

Following Hidilyn’s historic win, these celebrities took to social media to congratulate the weightlifter for the pride and honor she brought to the country.

Lea Salonga said she couldn’t help but shed tears after the Philippines’ national anthem was played when Hidilyn was announced as the winner.

Anne Curtis also took to Twitter to laud and thank Hidilyn for her hardwork and dedication.

Jane Oineza, who portrayed Hidilyn in an episode of drama anthology Maalaala Mo Kaya (MMK) in 2016, shared a throwback photo with the Olympic medalist to congratulate her on her win.

Janine Gutierrez, on the other hand, thanked Hidilyn for the proud moment, calling her a hero.

Posting a throwback photo with Hidilyn when she first won her silver medal in the 2016 Rio Olympics, Angel Locsin celebrated the weightlifter’s triumph, saying she hopes to have another snap with the latter once again.

Check out other celebrities who celebrated Hidilyn’s victory here: