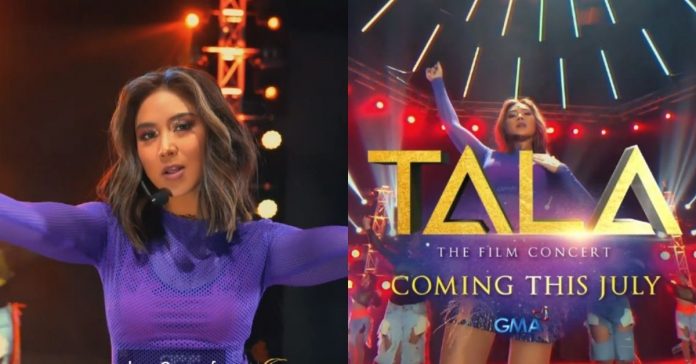 On Friday, GMA Network released on its Facebook page a 30-second teaser clip of the Popstar Royalty’s pre-recorded virtual show, which will be aired on Sunday, July 18 at 4:35 p.m.

“The skies have opened, spotlights have shined, and the stage is set! A star will finally land this July 18 on GMA,” read the Kapuso network’s Facebook post.

Sarah will also perform her own rendition of global hit songs such as The Weekend’s  Blinding Lights,  Dua Lipa’s Levitating and Break My Heart, as well as BTS’s Dynamite.

Joining her in the virtual concert Hale’s vocalist Champ Lui Pio, her White Samoyed dog, and her husband Matteo Guidicelli.

Directed by Paul Basinillo, with Louie Ocampo as musical director and Georcelle Dapat-Sy as the creative director, Tala: The Film Concert was taped last December 2020 at the Araneta Coliseum.