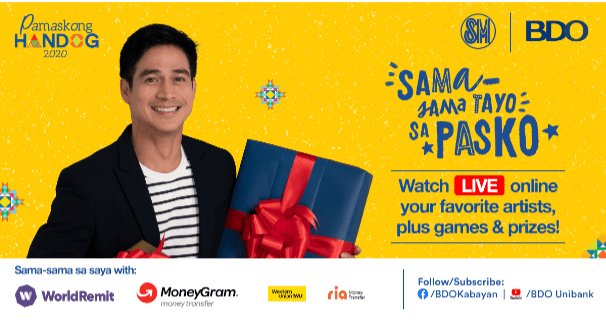 Even amid the new normal, BDO Unibank and SM Supermalls are finding ways to continue their annual tradition of paying tribute to overseas Filipinos (OFs) and their families during the Christmas season.

This year, the companies held their much-anticipated Pamaskong Handog as a virtual event but still featured a star-studded roster of performers and exciting line-up of activities as it has been known for all these years.

The importance of carrying on with the tradition was recently highlighted at a media teleconference that formally launched the Pamaskong Handog 2020: Sama-Sama Tayo sa Pasko.

Gloria said that this year’s Pamaskong Handog would be streamed through Facebook live on the BDO Kabayan Facebook page and through simulcast on the BDO Unibank YouTube channel on December 13. The event was headlined by Piolo Pascual, Christian Antolin, Marcelito Pomoy, Beks Batallion and Donekla.

“Our overseas Filipinos have been through a lot this year. We hope that by keeping the tradition of Pamaskong Handog alive, even under the rules of safety, we can still give a sense of optimism, that hope that we will get through this and we will all bounce back,” she said.

Apart from the celebrities joining the event, viewers from all over the world were treated to virtual games with many prizes.

The event is just one of the many initiatives of BDO, which has been actively engaging with overseas Filipinos and their families, as many of them depend on the bank for their financial-related transactions.

BDO Remit has been an economic lifeblood for the nation for years, most especially during these trying times. It provides a safe, trusted and reliable remittance channel for millions of Filipinos all over the world.

Another service, BDO Cash Agad, provides bank services in remote locations of the archipelago. Meanwhile, BDO Network Bank, the rural bank subsidiary of BDO, takes care of the underserved and unserved customers, including the remittance beneficiaries who live in far-flung areas.

The number of overseas Filipino workers (OFWs) is now estimated at 12.5 million across more than 150 countries and continents.

SM Supermalls, meanwhile, assured its commitment to serve the public through a safe malling experience for their shoppers’ needs amid the pandemic.

“Even when the country went in quarantine, SM Supermalls has consistently prioritized customer safety and satisfaction with #SafetyMallingAtSM. And even with the increased operation of our malls with the lifting of the lockdowns, we always see to it that each and every mall strictly follows safety practices and sanitation protocols that comply with government directives to ensure a safe malling and dining experience for everyone,” said San Agustin.