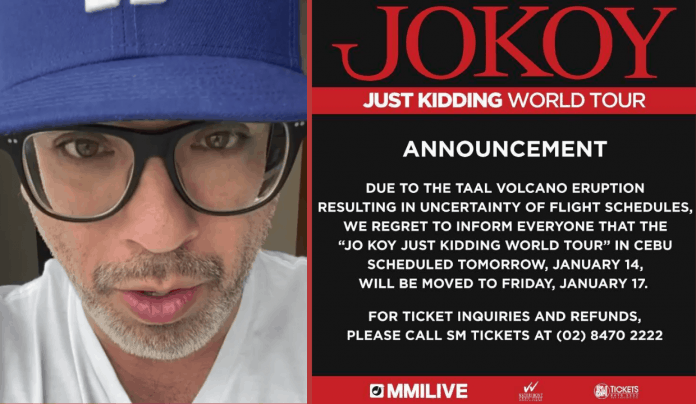 Jo Koy is in the Philippines for his stand-up comedy show Jo Koy: Just Kidding in Manila and Cebu.

His caption read: “Send your prayers to everyone affected by Volcano last night. MOA Arena will go on! Cebu will be on the 17th! Mahal kita #prayforthephilippines #taalvolcano”

“I am out here in the Philippines and I want everyone to send their prayers out to the families who were affected by the volcano last night. Ash is everywhere,” he said in his video posted earlier today.

He continued on to announce that the Cebu leg his tour will be rescheduled. It was originally scheduled for January 14 but due to the volcano eruption it was moved to January 17, Friday.

“The airport has been shut down so I had to move my Cebu date from the 14th to the 17th but I will get back out to Cebu. MOA Arena, staying on. We’re not cancelling that at all so don’t worry about that,” Jo Koy said.

“But most importantly, please send your prayers out to these families that have been affected by the volcano,” he ended.

Just last week, Jo Koy was spotted filming at a farmer’s market in Cubao for an unnamed “special project”.

On Sunday, he joined the latest batch of celebrities including Catriona Gray and Rachelle Ann Go who received a star at the Eastwood Walk of Fame.