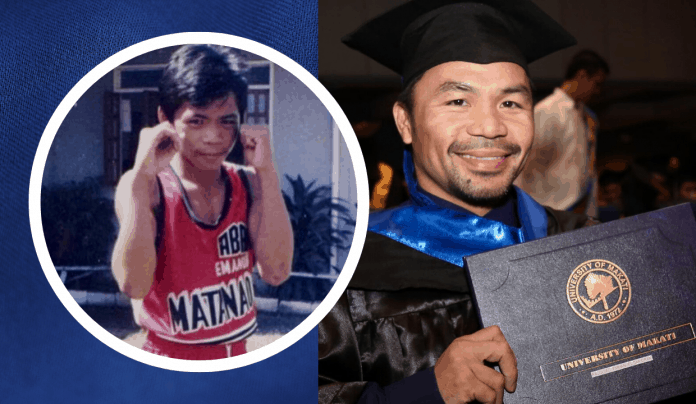 Out of all his achievements, Senator Manny Pacquiao considers his degree in political science as his “most meaningful”.

For Senator Manny Pacquiao, it is “never too late to dream bigger dreams”.

At 40, he accomplished his dream of graduating from college. Pacquiao is now a certified degree holder after finishing Political Science Major in Local Government from the University of Makati.

ICDYK, the boxing icon dropped out of high school due to extreme poverty.

But in February 2007, he took and passed a high school equivalency exam, which made him eligible for a college education.

The boxing champ took to Instagram to share how he finally got his degree and thanked the people who helped him reach his newest achievement.

“I am grateful to the Expanded Tertiary Education Equivalency and Accreditation Program (ETEEAP) of the Philippine Councilors League-Legislative Academy (PCCLA) which gives chance to qualified Filipinos to attain College degree/diploma — Filipinos who wish to complete college through informal education. The enriching learning program was in partnership with the University of Makati College of Continuing, Advanced and Professional Studies, the Development Academy of the Philippines and the Philippine Society for Public Administration.”

Pacquiao added: “I will always remember the key lessons that I learned and the insights that I gained from all of you! I will always cherish the excitement that I experienced during the entire learning process leading to the exit conference, the final requirement that I needed to complete in order to earn a degree in Bachelor of Arts in Political Science- Local Government Administration.”

The senator dedicates his feat to his family — wife Jinkee and their children Jimuel, Michael, Princess, Queenie and ISrael.

“I will also show this diploma to my Mommy Dionisia, my Dad, and my siblings and remind them of God’s faithfulness,” he continued in an Instagram post.

He also left a message to those who are going through a lot in life. “Let this victory outside the boxing ring serve as an inspiration for people who are struggling to  fight, to rise above adversity, to conquer and to embrace life and all its difficulties.”