IN PHOTOS: All of Gazini Ganados’ looks at Miss Universe prelims 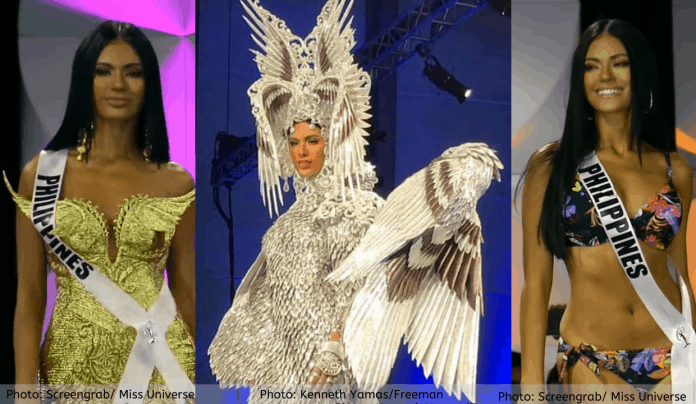 Two days to go until the most beautiful night in the Universe, Philippine bet Gazini Ganados is already putting her game face on.

The 23-year-old beauty queen just proved she is worthy of the crown as she totally slayed during the Miss Universe preliminary competition and national costume show held at the Marriott Marquis in Atlanta, Georgia, USA on Saturday.

Gazini introduced herself to the crowd wearing a pink gown by Sherri Hill.

Here are her other looks during the prelims night.

The Cebuana beauty reigned supreme with her Philippine Eagle-inspired gown. The hand-stitched silver haute couture by the Cebu-based designer Cary Santiago has two life-sized eagles attached on each side of her shoulders.

Imitating the head movement of an eagle complete with fierce eyes, Gazini also had a little surprise for the audience as she spread out the mini wings underneath her gown.

Gazini dazzled in her signature golden “Phoenix” evening gown. It was similar to what she wore at the Binibining Pilipinas coronation night in July.

She flawlessly strut and twirled with her yellow cape, while showing her curves in a printed two-piece swimsuit.

Netizens are calling her walk, the “Phoenix Walk”. And if reigning Miss Universe Catriona Gray had the slow-mo twirl, fans are calling Gazini’s the “quick-mo” turn.

Meanwhile, pageant fans showed their support for the Philippine representative on Twitter with the hashtags #MissPhilippines and #GaziniGanado5 (a play on her family name Ganados), hoping she claims the fifth Miss Universe crown for the country after Gloria Diaz (1969), Margie Moran (1973), Pia Wurtzbach (2015) and Catriona Gray (2018).

The event was co-hosted by Miss Universe 2018 Catriona Gray who also happened to introduce Gazini in the competition.

Will a back-to-back win happen for the Philippines? We also can’t wait to find out!