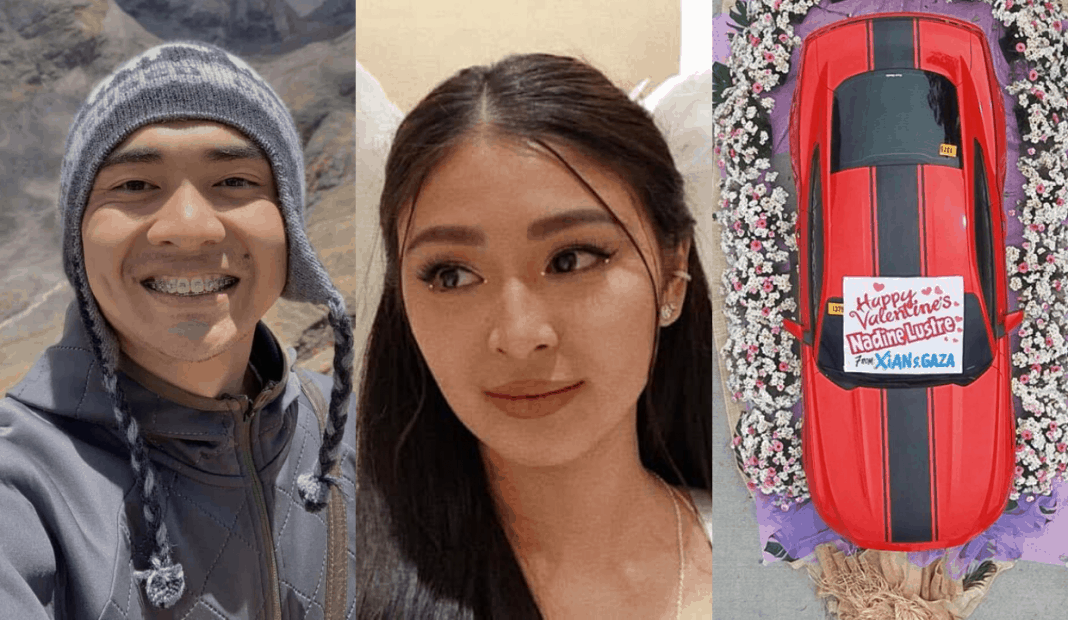 On Monday, Xian posted a photo of his Valentine’s gift to Nadine — a red mustang surrounded by a bunch of flowers along with a banner that read: “Happy Valentines Nadine Lustre, from Xian S. Gaza”.

The controversial social media personality also penned a letter alongside the photo of the “Bouquet of Mustang” on Facebook.

Xian said that he is willing to do everything to get the attention of the girl he admires, be it in a lavish way.

“Since my teenage days, KSP na talaga ako. Whenever I really like someone, gagawin ko ang lahat-lahat para makuha ang atensyon nung babaeng gusto ko in the grandest way possible within my means. Just like my ligaw efforts to Ella Cruz way back 2016 and so with my epic fail billboard for Erich (Gonzales) last 2017,” he continued.

Xian made headlines in 2017 after he asked Erich Gonzales out on a coffee date through a billboard ad in Manila, but was turned down by the actress.

He said that he might once again appear like a fool to the public but he’s just being himself. “Three years after, here I am again. Nagpapapansin naman this time sayo. Maaari nanamang magmukhang tanga at katatawanan ng publiko but idgaf sa opinyon ng iba. This is me, this is how I express myself, this is the way I am.”

Xian added: “Maybe iisipin ng madlang people that this Ford Mustang is too much, na parang binibili kita at yung pagkababae mo. Nope! It’s just that my financial capacity at the moment is a little bit good and I believe that you deserve to be the first ever person in the Philippines to receive a ‘Bouquet of Mustang’ as a Valentines gift because that’s how high I value you as a woman.”

Xian also reiterated that “all I want is to be your acquaintance, nothing more nothing less.”

“Happy Valentines to you, Nadine,” he ended.

He also changed his Facebook cover photo to a photo of Nadine.

Nadine is also the only person he follows on Instagram.

Xian is hoping that Nadine, who’s fresh off a breakup with ex-boyfriend James Reid last January, will be able to accept his Valentine’s proposal.