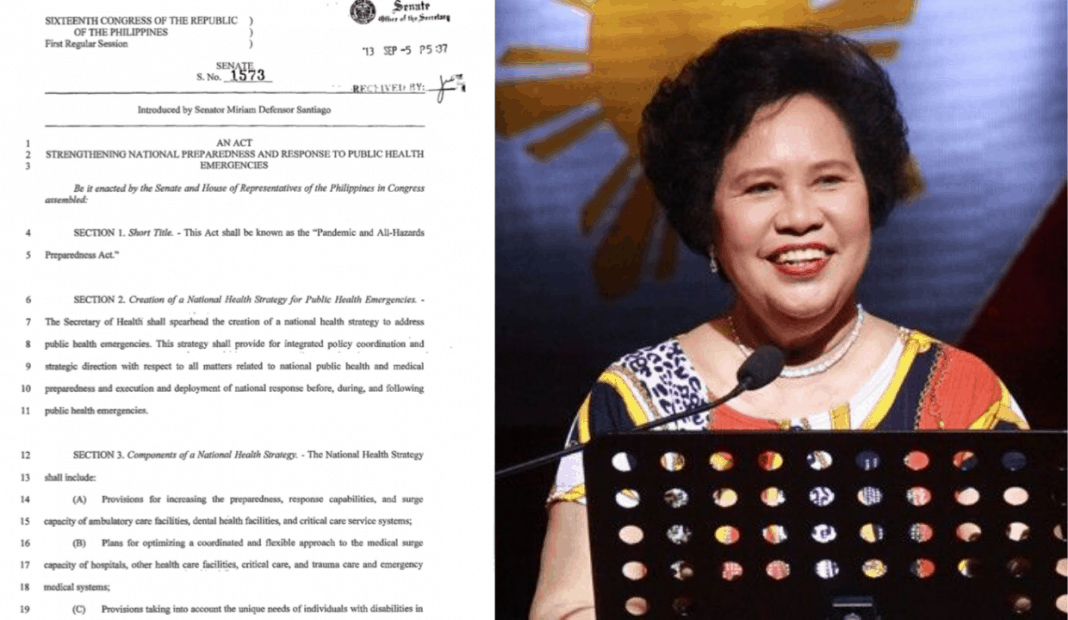 “An ounce of prevention is worth a pound of cure.”

Seven years ago, before the world was hit with the coronavirus (COVID-19) pandemic, the late Senator Miriam Defensor Santiago filed the Senate Bill no. 1573 Pandemic and All-Hazards Preparedness Act, which could have helped prepare the Philippines against the deadly virus.

The “legislative status” of the act meant to strengthen national preparedness and response to public health emergencies is still “pending in the committee,” the official website of the Senate said.

It was filed by Santiago on September 5, 2013, or three months after “health experts started emergency international meetings to devise ways of combating a mysterious virus that has been described as the single biggest worldwide public health threat.” This was the Middle East Respiratory Syndrome (MERS), which at that time was feared to be a “new pandemic” deadlier than the SARS coronavirus outbreak from late 2002 to July 2003.

“This bill is built upon such wisdom by seeking to strengthen national response and preparedness for public health emergencies, such as those which result from natural disasters and severe weather, recent outbreaks and pandemics, bioterrorism, mass casualties, chemical emergencies and radiation emergencies,” it said.

The bill was meant to give the Department of Health (DOH) the mandate to undergo evaluation, planning, organizing and training to improve the country’s preparedness if and when a public health emergency occurs.

Under the proposed law, the Secretary of Health would “spearhead the creation of a national health strategy to address public health emergencies,” components of which included “plans for optimizing a coordinated and flexible approach to the medical surge capacity of hospitals, other health care facilities, critical care and trauma care, and emergency medical systems.”

A creation of a medical reserve corps composed of volunteer health professionals who will be called into duty if needed was also proposed. Such section could have addressed DOH’s urgent call for volunteer health workers — doctors, nurses, nurse assistants and hospital orderlies — to join the fight against COVID-19.

This proposed bill by the late lawmaker from Iloilo has been passed around in social media after the pandemic has hit the country.

The three-term senator, who ran for president in the May 2016 national elections, died of lung cancer in September 2016 at the age of 71.